1. Jokes about the underground transport system in Bratislava has been around for decades. Sometimes the idea was a fast train instead of underground, but the corridors that were reserved for this are now holding bank skyscrapers and other buildings built by rich bankers who are more interested in their profits than the public good. That is why the highway in Bratislava is used more as a crowded local road than a highway today and the citizen of Slovakia will have to sponsor another highway of the capital. Poor and indebted city Bratislava decided to build a tram over the Danube river already back in 2003 and in 2009 the members of the city parliament thought that the tram will start operating from 2011. Perhaps it was needed that a computer scientist will become a mayor of the city in order for the city to build at least something. Finally this summer the citizen of Petrzalka (right bank of the Danbue river) will hopefully start travelling to city centre by an electric public transport over the newly open Old bridge.

Two years ago the members of the Bratislava parliament decided that the new tram will not turn around in Petržalka, but they will use bi-directional trams with doors on both sides so that the driver can always open the doors on the right side in the direction of travel. At the last stop, he or she will walk through the tram to a cabin on the other end, and move to the rail in opposite direction with the help of a rail switch.

Task: Build a model of the Petržalka tram with doors on both sides that can open automatically (using a motor). The tram track is marked with a black tape and it contains turnings both to the right and to the left. The tram stops on both sides are marked with short black tape stripes that are perpendicular to the track. They are always on the right side of the direction of travel. The tram stops there in that direction only. Some stops are opposite to each other, some are not. The tram robot should stop at all tram stops, open the door so that the LEGO figures can get off or get on if they feel like it. The tram robot starts at the Main railway station (North), travels along the whole track till the last stop in Petržalka, and then it travels back. It stops at each marked tram stop. It should be using one or more light/color sensors when moving in each direction. Take care at the sharp turnings near the Faculty of Civil Engineering and near the Trinity Church. :-) 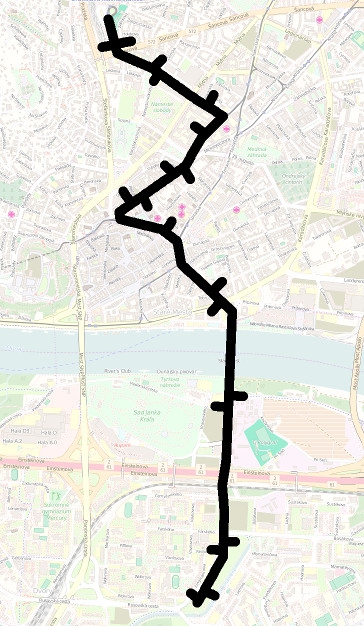 2. Robot reached the end of the school year. A 30 cm high solid unmovable wall / wooden plate is located right in front of him. The school holidays begin behind this wall. If the robot can climb it, the happy holidays follow. Build a robot that can climb over the wall and that can fit into a cube with a side of length 30 cm. Try to make sure that the robot landing into holidays will be a soft one and not a hard one. :-)

This is the last round of the regular part of the Summer league. An independent extra bonus round number ten with deadline at the end of the summer holiday will appear in late June.