The ski holidays season is in full swing and even though the climate change is not only giving nightmares, but it also brings daily extreme temperatures, there are still places to go skiing. The slopes are prepared by heavy machines. At places where the slope is particularly steep, they can have a hard time to keep going. Ski ratrack producers thus invented a simple trick: the vehicle hangs on a steel rope attached to some fixed point at the top of the slope and uses the rope to balance out, secure, and pull the vehicle up when needed. As a consequence, the ride is smooth, without hurdles in steep segments, and the resulting snow quality is better. High-power reel is capable to lift up the whole machine when in need. Be careful, the rope can be very dangerous! 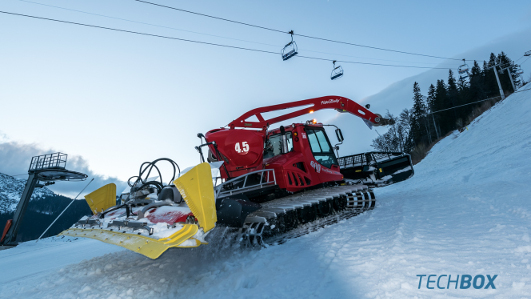 Task: Build an autonomous ski ratrack with reel and a rope that will be capable of safe navigation on slopes with 60o inclination. Use the gears to amplify the force applied to the hanging rope. Demonstrate that the ratrack can successfully work on a slope consisting of several parallel stripes next to each other.

Most of the electric cars show the instant power consumption on their control panel. The drivers could tell stories about how the consumption changes depending on whether there is another vehicle (i.e. a truck) in front of the car. The vehicle breaks the air and dramatically reduces the air resistance, which is the most important reason the car needs to use energy in order to move from a point A to a point B, especially on a flat terrain. That's exactly the reason for efficiency of the Musk's transport system based on capsules moving in closed pipes with near vacuum.

Task: measure the air resistance. We leave it up to your creativity, imagination and skills how you solve this task. For those who need help, here is a hint: use the free fall of objects that have different weight, but the same shape. Find some staircase, or another place with sufficient altitude differences and use multiple (at least two) robotics control units to measure times of fly-bys of the objects. The control units should synchronize their times before (and after?) the experiment electronically. Be careful, make sure you perform the experiments under the supervision of your coach and document your measurements in detail. If you use another way to measure air resistance, we will be even more happy. :) Express your results using units and variables that you describe clearly.